A series of construction projects have been taking place on Lodi Ave with the goal of restoring the legendary Sunset Theater and creating “Sunset on the Ave.” Learn more here.

The Sunset Theater has long been considered a historical building in Lodi, California. After the building had closed down in 1997, and later the historic Alexander’s Bakery next-door had closed its doors in 2003, the two buildings sat abandoned and often vandalized at 1110 West Lodi Ave. That was until Terry Clark purchased the two buildings with a vision of creating something for the people of Lodi!

Terry Clark, former owner of Clark’s Pest Control, envisions the Sunset Theater becoming a multipurpose entertainment and meeting center with an accompanying parking structure. The parking structure is set to be multi-level with limited retail and office space on the ground floor.

The renovation has been a lengthy process that will continue throughout 2021. Terry Clark wrote the following apology and project timeline on the Sunset Theater Lodi Facebook page.

“I just want to offer a quick apology for the traffic disruption on Lodi Avenue as we tear out the sidewalks in front of the theater. I know it seems like a long time but very soon we will have this stage of construction done. Repaving of Lodi Ave begins at the end of the month [May] so we must complete the sidewalks curb and gutter quickly.”

“Within a couple of months the power lines will come down and you can expect a few more days of one lane traffic on east bound Lodi Ave as we refurbish the iconic Sunset sign.”

While The Sunset Theater is not located in downtown Lodi, the sign can still be seen six blocks down Lodi Ave to the downtown district. Mr. Clark hopes the Theater will also serve as a rec center for kids just as the former rec center at Kofu Park served him when he was younger. He also has ideas for more improvements around Lodi, but that’s a story for another time.

You can follow Mr. Clark and his updates for Susnet on the Ave at the Sunset Theater Lodi Facebook page here. And keep an eye on The Grapevine News for more community projects coming soon to the area. 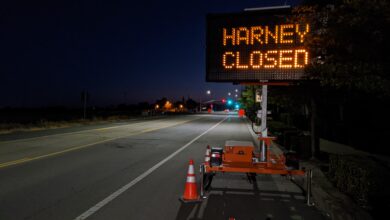